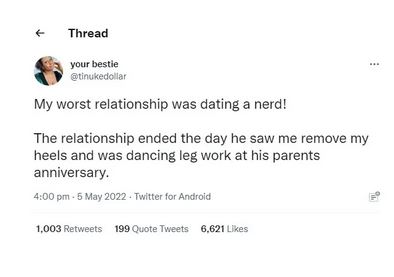 A lady simply identified as Tinuke has taken to Twitter to open up about how her relationship ended.

According to her, the guy she dated was a nerd who broke up with her after seeing the way she danced at his parents wedding anniversary.

Tinuke said that she took off her heels at the party and started dancing leg work much to the disapproval of her man who subsequently ended their relationship.

Taking to Twitter, she wrote; ”My worst relationship was dating a nerd!

The relationship ended the day he saw me remove my heels and was dancing leg work at his parents anniversary.”