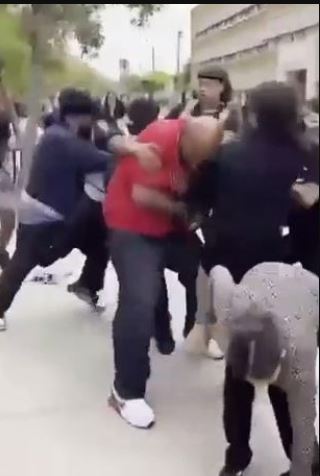 The police have arrested two persons in connection with a brawl at a high school allegedly started by a student’s dad.

The fight took place at Tucson High School in Arizona on Wednesday, May 4, prompting the campus to be put into a temporary lockdown.

In a clip from the scene, students can be seen piled on top of one another as they fight in groups.

According to CBS affiliate KOLD News 13, court documents obtained on Wednesday revealed a man and his two sons were advised before the disturbance to use an exit that would help them avoid a confrontation.

The police department added that a 40-year-old Willie Smith has been arrested on a felony charge of disrupting an educational institute while a 15-year-old boy is facing a charge of disorderly conduct-fighting.

According to an interim complaint, Smith was summoned to the school to pick up his two sons, who were being sent home after a disturbance with another group of students.

Smith was advised by school staff and safety officers that he and his sons should leave through a back exit, rather than the actual campus, the document said.

But Smith was alleged to have refused and to have taken his sons through the courtyard during lunch.

Smith was alleged to have told staff this was an ongoing issue and there would be a problem if it’s not addressed.

Officers said Smith was referring to his sons protecting themselves if provoked.

There was an exchange between a group of students and one of Smith’s sons when the three walked through the courtyard, and a fight broke out.

When both of Smith’s sons allegedly got into an altercation, Smith reportedly followed them into the area and got into “mutual combat” with a student.

Both parties were throwing punches at each other before Smith allegedly pinned one student to the ground by his neck.

The dad has since admitted to fighting with the student and claimed the student was assaulting his son, the complaint said.

According to the complaint, Smith said he and his sons didn’t feel they needed to leave through the back gate since he was not told by school staff that his sons had done anything wrong to be sent home.

The district said all students and staff were safe and the campus returned to normal operations a few hours after the incident.

The clip of the incident has been shared on Twitter.

One Twitter user alleged: “A dad started this whole altercation.” 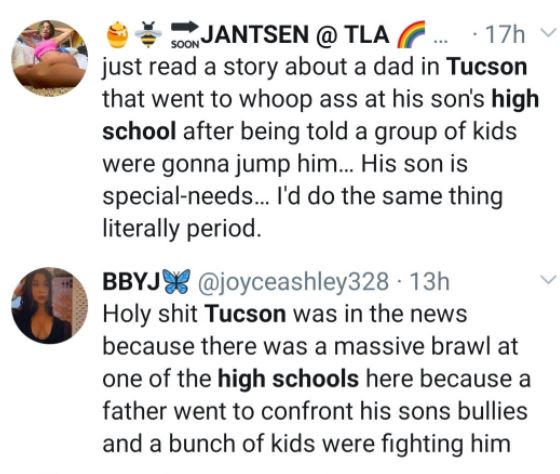 Watch The Fight Below;

@whatsuptucson Video from inside Tucson High School shows a parent involved in an altercation with multiple students. pic.twitter.com/97WZ9kbpZ6